On February 8, Yvette Aguiar, Supervisor, Town of Riverhead, held her State of the Town address at Riverhead Town Hall. She talked about her administration’s challenges during her first year in office, how the Town worked to overcome those challenges and mitigate the effects of Hurricane Isaias and the COVID-19 pandemic.

She went on to outline other initiatives over the past year to move the Town forward, despite the pandemic’s impact. Her administration worked on efforts to mitigate the effects of the pandemic on the Town residents and its finances and made important investments in public safety. “At a time when people were scared and confused, with limited movement and resources, we worked to protect our residents and helped those most in need,” she said.

To help these communities, the Town worked to provide shelter for the homeless and partnered with the county to supply emergency food deliveries to homebound residents and families in need.

“The pandemic has had its greatest impact on the Town’s children and seniors,” Supervisor Aguiar said. “Very often, our seniors found it difficult to access food, healthcare and other essential services.”

Under her leadership, the Town created the Riverhead SAFE (Senior Assistance for Essentials) program, which delivered food, medications and supplies to older residents and enhanced its Senior Meals on Wheels program. Supervisor Aguiar announced that, starting next week, the Town will launch an outreach program to assist seniors with transportation to and from Riverhead vaccination sites. Future plans include an expansion of the Town’s Senior Home Improvement program.

The pandemic also impacted the town’s finances, with a $1.8 million reduction in building application fees, State and County aid and Justice Court revenues in the General Fund. To mitigate these losses, Supervisor Aguiar’s administration reduced spending by 1.14%. She renegotiated the 2018 contracts for the Town’s police officers and superior officers at a savings of $645,000 for 2021 and renegotiated a reduction in insurance cost for 2021 at $30,326. In addition, the Town was able to lower its debt by $9.68 million.

Supervisor Aguiar also addressed the topic of illegal overcrowding and its impact on schools. Upon taking office, she commenced five Supreme Court actions and adjusted the hours for Code Enforcement. However, these actions, and other initiatives to reduce illegal, overcrowded housing, were put on hold by the governor’s eviction moratorium, which will be in effect until May 31.

“This will continue to be a priority of my administration,” Supervisor Aguiar said of the overcrowding crisis. “We will also work to enhance the availability of legal workforce housing for our Town’s residents.”

On environmental issues, Supervisor Aguiar said she will work to protect the residents of Manorville and those living east of the Enterprise Park at Calverton (EPCAL), who are threatened by contaminants in the drinking water. “These residents deserve clean and safe water now. I will continue to champion with Federal, State and Local officials to supply the necessary water as quickly as possible,” she said.

On the issues of downtown revitalization and economic development, the supervisor announced that the Pattern Book has been completed and adopted and will be used as a guide for the ongoing revitalization of Riverhead’s downtown. These include the addition of nationally recognized chain stores and shops, the purchase of the old Swezey’s building by the Long Island Science Museum and the scheduled fall opening of the Island Water Park, an interactive family-friendly amusement center featuring an indoor surf pool, restaurant and café. Thanks in part to an $800,000 grant received by the Community Development Agency, the Town will create a Town Square on the Peconic Riverwalk.

“We as a Town will navigate and successfully tackle any future challenges presented to us,” Supervisor Aguiar said. “I am confident we will emerge from the current State of Emergency as a greater, smarter and more cohesive community, dedicated to building a better future for our residents.”

Yvette Aguiar, Supervisor, Town of Riverhead, delivers the State of the Town address at Riverhead Town Hall on February 8.

* A photo of Supervisor Aguiar and a copy of her speech are attached. 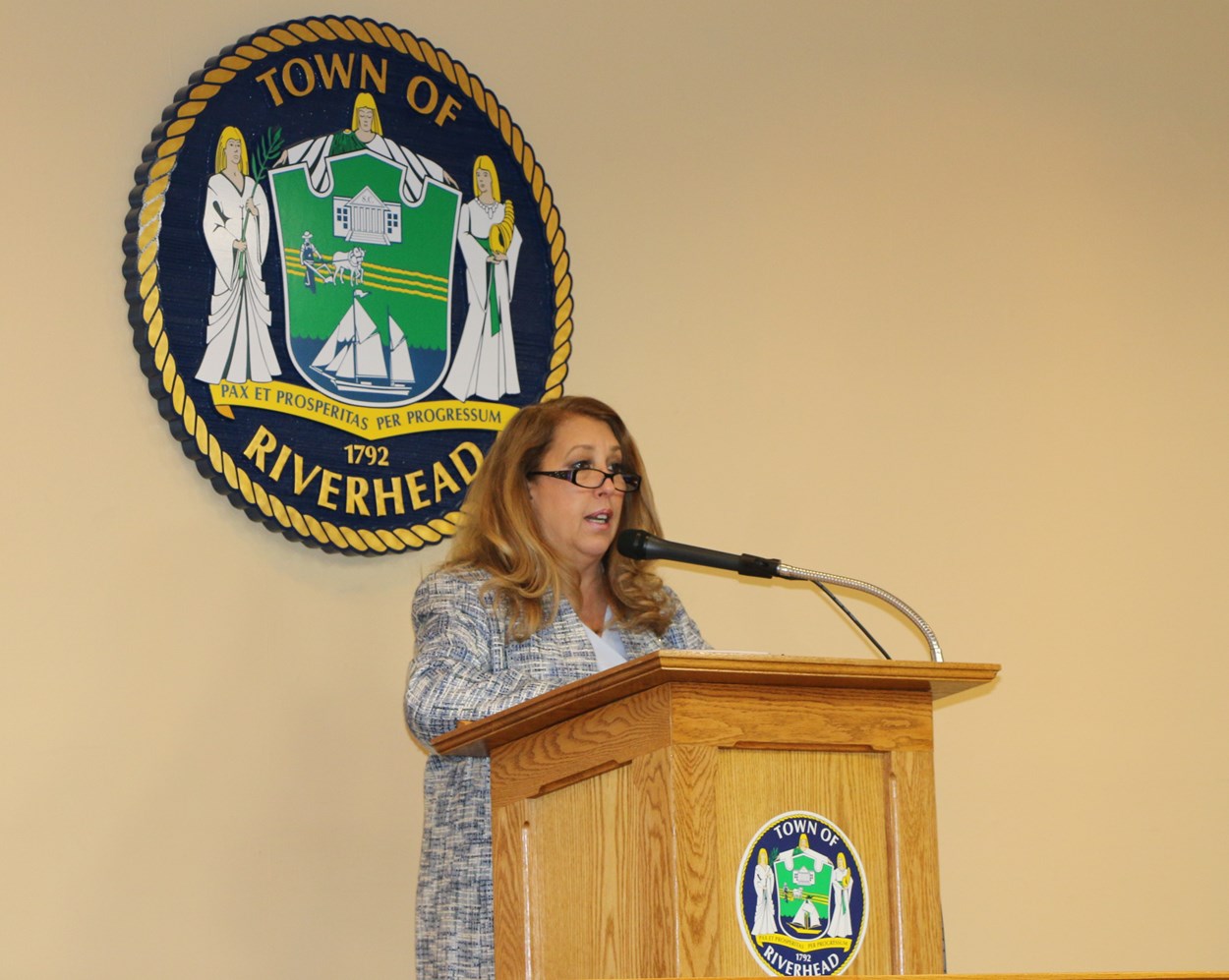 Yvette Aguiar was elected Riverhead Town Supervisor, making her the first Latina to be elected to that post. Throughout her campaign, Ms. Aguiar touted a 10-point strategic plan to crack down on illegal, overcrowded housing that has affected both the residents’ property values and quality of life, and the students’ ability to learn. She told Newsday that, as part of her platform, “the people of Riverhead are always going to come first.”

My 10 point plan to alleviate illegal and dangerous overcrowding

1. Create a Task Force to pool all our resources, i.e. code enforcement officers, fire marshals, police, a town attorney, traffic control officers (TCOs), building inspectors, and code enforcement officers. The goal is to pool our resources and work collectively in a cohesive manner. For example, identify locations where cars are parked illegally on both sides of the streets, causing traffic congestion. Once these violations are observed by our traffic control officers, violations should be documented.

2. The task force should be headed by a town member who is well-versed in law enforcement, town codes and managerial experience.

3.Enhance the computer tracking system to identify and document illegal overcrowded homes and time stamp the violation(s) for processing purposes with identified levels of action.

4. Hire at least two additional code enforcement officers. This approach will eventually lead to a reduction in excessive school taxes. (Southampton Town has at least six code officers, Riverhead has only 3.5).

5. Meet with our town justices to ensure they are aware of increased code enforcement and resolve any concerns appropriately. Create an increased penalty scale consisting of at least $5,000 for the initial violation.

6. Commence legal action against landlords and homeowners who enable excessive renters in Supreme Court. Not one Supreme Court action has been initiated in the last two years.

7. Create an intelligence reporting system with checkboxes for all code enforcement officers, fire marshals, policer officers, traffic control officers, and the public to initiative the preponderance of evidence required in court.

9.These violations can be simply documented on a short checkbox intelligence report, along with photograph(s) of the violation. Any town personnel who witness these violations can easily prepare the form quickly and submit the document to the Task Force for documentation into the tracking system. In addition, commence utilizing residency affidavits.

10. Establish a working relationship with the Riverhead Central School District and civic groups to report on the progress of the Task Force.

Video at the school board meeting on September 24, 2019

I had no intention to talk until a school board member stated the current supervisor candidate has no plan for school overcrowding.

2 articles from the Riverhead Local:

Indecisiveness on by town supervisor on state water grant